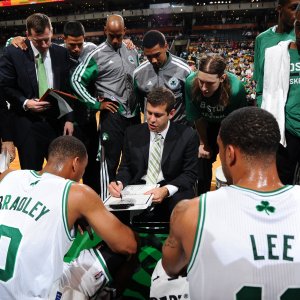 WALTHAM, Mass. — When describing the reasons for his team’s successes or failures, Boston Celtics first-year coach Brad Stevens often uses the same buzzwords explaining whether his team played “connected” or with a “togetherness.”
The idea is rather simple: The Celtics can achieve their goals only if all 14 players are pulling in the same direction. It’s very Ubuntu-like, the “I am because we are” philosophy that governed Boston during the halcyon days of the Big Three era (and the idea seems particularly noteworthy today with the passing of Nelson Mandela).

Togetherness was a word that former Celtics coach Doc Rivers used in bulk. A couple years back, Indiana Pacers coach Frank Vogel noted how he used to write “Togetherness” on his team’s whiteboard before every practice or film session and said it was because of how often he heard Rivers utter it during Boston’s 2008 title season.

Stevens’ version of togetherness is built off The Butler Way, which the school notes “demands commitment, denies selfishness, and accepts reality, yet seeks constant improvement while promoting the good of the team above self.”

Reflecting on the first 20 games of the 2013-14 season, Stevens said Thursday that he’s most pleased with the way the team has grown together.

“I think we learn every day about our team and we’re still not completely well-versed in it, but I do think that the best thing about our growth, in general, there’s just a different sense of team-ness, there’s a different sense of knowing each other,” said Stevens. “We’re still only two months together, but we’ve gone through a lot already, wins and losses, lots of games, lots of travel. Hopefully we can continue to build on that, but we’re still learning [the players] personality-wise, and we’re still learning them within a game. But I think we’ve got a better feel than we did two months ago.”

Stevens believes that’s reflected on the court. Boston lost 10 of its first 14 games and often looked like a team with a first-year coach and a bunch of new faces learning a new system. Over the past six games, Boston is 4-2 and putting up encouraging numbers (even if the competition hasn’t always been the most daunting).

Over a six-game span starting on Nov. 23, Boston has posted the fourth-best defensive rating in the league (97.4 points per 100 possessions) and ranked sixth in total rebound percentage (52 percent). Heck, even Boston’s often-anemic offense ranked in the top half of the league (14th, 103.1) during that span.

Stevens believes it’s a product of players settling into roles and not only thriving individually, but as a group. A whirlwind November forced Boston to learn on the fly and that led to some normal growing pains along the way. But it also brought this new-look team closer together.