Jon Gordon: Are You a Real Team?

Posted on October 1, 2013 by coachmikemak 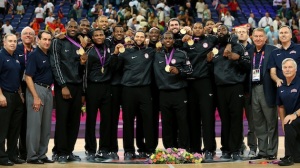 A great read for all. Please share with your organization, team, colleagues and players.
There’s a difference between being on a team and being a real team.

On a team, your time is more important than your team.
A real team makes time with the team a priority.

On a team, trust, love and respect are not often discussed or cultivated.
A real team focuses on building trust, sharing love and showing respect and ingrain them into everything they do.

On a team, not everyone is on the bus.
A real team has everyone on the bus with a shared vision, focus and purpose.

On a team, there’s a lack of leadership
A real team has strong leaders who develop other leaders.

So how about your team? Are you just on a team or are you a real team?

Jon Gordon: Are You a Team?

This entry was posted in Coaching, Team Identity and tagged are you a real team? team first, Are you a team, Dream Team, Jon Gordon, Jon Gordon blog, team blog, Team USA. Bookmark the permalink.