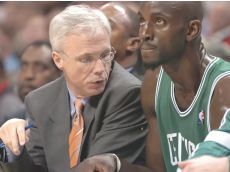 If you’re having a tough year, your players can’t allow themselves to believe that you were snake bitten or you were destined to lose. Instead, make sure they know they have the choice to prepare for every game like a winner, to practice every day like a winner, to improve their strength like a winner. Regardless of the game’s outcome, players have a choice to conduct and carry themselves like the winners they hope to become.

In 2006 our record was 24-58, one of the worst records in the NBA. But if you came to our practices or you listened to Doc talk to our team, you would never have thought that. Every day that year we continued to develop habits that would lead to success. We had a choice to believe we were destined to lose or to create winning habits that would eventually lead to winning results. Granted, we were able to add two very significant parts to our team, but the next year we were 66-16 and NBA World Champions. Kendrick Perkins and Rajon Rondo were important parts of that championship run and their success was nurtured during the 24-win season because Doc Rivers would not allow us to choose the destiny excuse.

I just encourage those of you who may be in one of these two situations to think about your approach. Too often the outside influences on our players will talk to them about destiny, so you have to make sure they know that they do have the option — to let outside influences and luck dictate results, or to choose to control their destiny!