Posted on February 8, 2013 by coachmikemak 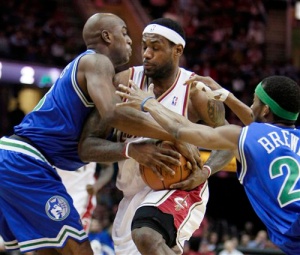 The first-round playoff series last year between the Boston Celtics and the Chicago Bulls was a memorable montage of overtimes and clutch shots. Celtics Coach Doc Rivers remembers it for another reason.

In Game 4, Boston held a 3-point lead with nine seconds remaining in overtime. He instructed his team to intentionally foul so Chicago could get only 2 points at the free-throw line, instead of potentially tying the game with a 3-pointer. His players failed to foul. Ben Gordon’s 3 tied the game and Chicago won in double overtime.

“We literally forgot to foul,” Rivers said. “We came out of the timeout and were going to foul. We messed it up. They score and win the game in overtime. And it takes us two extra games to win the series.”

Excerpt Sports Illustrated’s Luke Winn’s 2010 article:
Here’s the statistical picture of what happens when a team up three correctly executes a non-shooting foul in the waning seconds of a bonus situation: A 70-85 percent free-throw shooter needs to make his first attempt in a high-pressure situation. Then the odds turn against him. To create a long rebound on shot two, he needs to miss artfully — a skill that’s rarely practiced because it’s rarely required in games. How often can a player throw up that perfect brick? One in five times? One in 10? His teammates then need to get an offensive rebound, and this is when they’re at an even bigger disadvantage. Teams, on average, only grabbed 32.7 percent of available offensive boards in 2009-10 — under normal circumstances. But … free-throw rebounding is an abnormal situation. [So] let’s generously assign the odds of getting that offensive board at 30 percent. After that, the team would still need to make a two (a 47 percent shot, on average) to tie, or a three (a 34 percent shot, on average) to win. The odds of that tie sequence playing out are around 2 percent, and odds of a different tie sequence (with an unintentionally missed first free throw, an offensive rebound, and a three) are also around 2 percent. That’s a rough total of 4 percent.

Fouling to Protect a Lead: Debated but Rarely Done